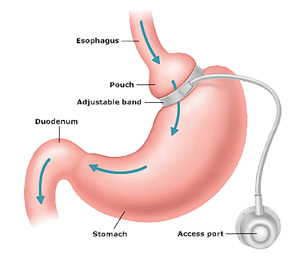 Dr. Robert Brolin never performed laparoscopic gastric banding due to the relatively poor results associated with open banding that were reported in the 1990’s. Removal of a gastric band caries greater risk than primary placement due to the dense scar tissue produced by the band.

Why Remove a Gastric Band?

Indications for removal of adjustable bands include:

Whether another bariatric procedure is performed at the time of band removal remains a controversial topic in bariatric surgery.

Dr. Brolin has advocated the one-stage approach in which the band is removed and a second procedure, either gastric sleeve or RYGB, is performed at the same time. This approach spares the time and expense of a second surgical procedure.

Surgeons who advocate the two-stage approach tend to believe that the scar tissue produced by the band poses an increased risk for complications such as leak, infection and bleeding.