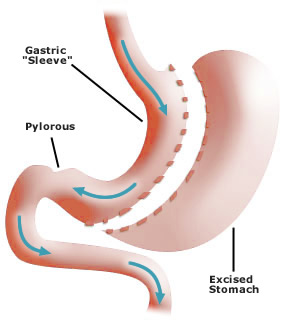 Sleeve gastrectomy (gastric sleeve) is probably the safest of all of the currently performed operations for the treatment of severe obesity.

LEAK – The most feared risk of sleeve gastrectomy is leak from the newly modified stomach. Because most sleeve gastrectomy patients are discharged from the hospital less than 48 hours postoperatively, nearly all leaks from the sleeve develop at home. This means that patients and family need to be aware of the signs and symptoms which should be promptly reported to the surgical team. Because the consequences of sleeve leak become progressively severe over time, symptoms suggestive of leak should be assessed within hours of onset. Surgeons should have a low threshold for evaluation of the complaints in a clinical setting. These symptoms range from vague progressive upper abdominal pain, left shoulder pain and fever, to shortness of breath and rapid heart rate.

NAUSEA / VOMITING – May occur after sleeve gastrectomy and typically resolves over a few days to several weeks. Occasionally nausea is associated with vomiting, which is potentially more dangerous. Persistent vomiting should be reported to the surgical team and requires evaluation. Persistent vomiting to the point where liquids and/or medications can’t be ingested is dangerous and can lead to more serious problems such as dehydration and vitamin / mineral deficiency. These usually require hospital admission for treatment.

GASTROESOPHAGEAL REFLUX (GERD) – This is the most common late side effect of sleeve gastrectomy. Many bariatric patients have symptoms of GERD prior to operation. Troublesome symptoms that require regular use of antireflux medications should be evaluated before the operation to rule out an associated hiatus hernia, esophagitis (inflammation of the lining of the esophagus) or Barrett’s esophagus (cellular changes in the lining which are potentially precancerous).

DEEP VENOUS THROMBOSIS – This is a rare but potentially life-threatening complication that has been associated with sleeve gastrectomy. Venous Thrombosis or blood clots may spontaneously develop in the major veins within the abdomen. This insidious complication is characterized by vague but persistent symptoms and generally develops within the first several weeks postoperatively.

Symptoms of Venous Thrombosis include vague upper abdominal pain, nausea, mid/upper back pain and occasionally fever. The diagnosis is typically established by CT scan which means that medical evaluation of these vague symptoms is necessary. Successful treatment is generally accomplished using blood thinners, although major surgery and/or radiologic “declotting” may be required in the most severe cases.